Enriching community life through quality parks and recreation for all ages

Westmont is a great place for active families. The Westmont Park District maintains over 150 acres of park property throughout the village. Recreational activities are scheduled throughout the year and are listed in our seasonal activities brochure which is delivered to residents of the entire village three times each year. The Westmont Park District uses its parks and facilities as well as the recreational assets of village schools in a comprehensive program of athletics, exercise and special events. There is an activity for every age group from toddlers to senior citizens.

The Westmont Park District has made great accomplishments since its formation in 1959.  We are proud to continue to do all that we can to provide a fun and safe recreation atmosphere for all ages to enjoy.

The Westmont Park District was formed in April 1959 by a referendum. The referendum asked the Village if they wanted to have a park district. The vote was 184 for and 59 against.

The first elected Commissioners were:

The first Budget and Appropriation Ordinance was for $20,000.

The first two parks purchased by the newly formed Park District were Kiwanis Park for $2,400 and LeBeck Park for $800.  Both were purchased in the first year.

In 1959-1960 the Park District agreed to purchase Veteran’s Memorial Park from the American Legion for $25,000.  This was the amount the American Legion paid for the 10 acres in the 1950’s.  The agreement with the Legion stated that the property would always remain a public park.

The Westmont Park District contracted to have a master plan developed to determine the community’s needs and future plans.  The master plan was instrumental in the passage of the 1973 referendum that funded the construction of the Community Center, the acquisition of Twin Lakes Park, Sentinel Park and Fritz Werley Park.  The master plan emphasized the need for a community swimming pool along with the land acquisition and the Community Center.  In 1974 the Westmont Park District hired its first full time director.

Gregg House was relocated to Veteran’s Memorial Park and serves as the Community Museum.

During the 1980’s the Westmont Park District acquired several park sites that included:

In 1984 the Westmont Park District purchased Twin Lakes Golf Course for $880,000 committing current funds to the acquisition.  The 26 acre site continues to serve as the District’s 9 hole golf course.

During the 90’s the District acquired several park sites and facilities.  These include:

In 1998 the Westmont Park District acquired 36 acres of property for 6.3 million dollars.  The District issued 8 million in bonds to not only purchase the property but to develop it.  The Park District was extremely fortunate to have Ty Warner decide to locate his corporate office across the street from the park.  With Ty’s financial assistance the land was developed and name Ty Warner Park after his donation of approximately 7 million dollars toward the development.

Ty Warner Park opens and becomes a very popular attraction for people of all ages.  Due to the popularity of the park, Ty Warner purchases a 5 acre site south of the park on Plaza Drive and donates it to the Park District.  The 5 acre was purchased for a future pool site if and when the community decided they wanted an aquatic complex.  The 5 acres site is called Ty Warner South and is the site of a soccer field. 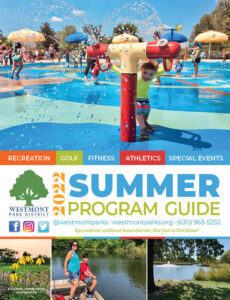