To view our other athletic programs for early childhood, youth, and adults, click here.

Wolverine Soccer is a step up from a traditional rec program but not the financial or travel commitment of a travel league. Westmont Wolverines soccer teams will participate in the Lisle Classic Soccer League. Teams will practice 1-2 times a week in Westmont and play approximately 8 games concluding the season with playoffs. Games will mostly be played on Saturdays in either Lisle or Westmont. This program is great for both beginners and more advanced players.

All home games will be played at Diane Main Park and there will be some travel for away games.

Wolverine Travel Basketball is for the athlete looking for more competitive play. The Westmont Wolverines will participate in the DuPage Youth Travel Basketball League. (DYTBL.net) Teams will practice twice a week and play approximately 20 games throughout the season typically on a Friday, Saturday and/or Sunday. All home games will be played at the Westmont Community Center or Westmont Junior High School and there will be some local travel for away games. Teams will also participate in 3-4 tournaments during the season for additional fun and playing time. Practices will begin mid October and playoffs end mid March.

Come join one of the most fun and popular basketball leagues in the area! Our Biddy Basketball league is a great league for beginners and advancing players. Volunteer coaches will teach fundamentals, skills and teamwork through 1 practice and 1 game a week. This league is offered to boys and girls grades K-4 and is co-ed. The season will run for 8 regular game weeks, with 2 additional playoff weeks for 1st – 4th grade. Practices and games will begin early January and run through March.

1st-4th grade levels will play both an 8-week regular season and 2 weeks of playoff tournaments.

Flag football is a growing alternative to full contact football that teaches basic skills and concepts of the game. The Wolverine Flag Football program is designed to introduce young athletes to the game while providing a safe environment to grow in the sport. The Westmont Wolverines are a part of the nationally recognized NFL Flag Football organization. Each participant receives a NFL Flag Football team jersey. The Wolverines will play in a league with various local teams. Practices will be held once a week in the evenings in Westmont and games will be played on Sundays at a local field.

Teams will be coached by volunteers, if interested in coaching please email Athletics Coordinator Rachel Buster-Dorsey at rdorsey@westmontparks.org 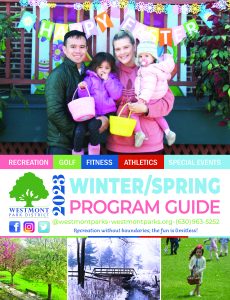